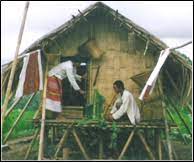 People of Halam sub-tribes, who took refuge in Assam following clashes with Bru refugees in north Tripura, are returning to their village Damcherra in North district of Tripura.

ISSUE: The northeast has had a history of ethnic conflicts — not only between the “indigenous” and “settlers” but inter-tribe too — and issues could also arise within smaller sub-groups within the same tribe.