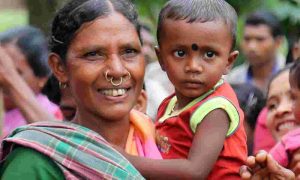 The Union Cabinet approved the inclusion of tribes of five states in the Scheduled Tribes (ST) category.