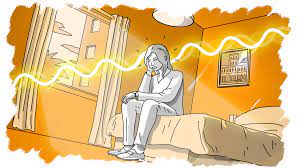 A US intelligence officer travelling with CIA director William Burns has reported symptoms of Havana Syndrome while the two were in India earlier this month.