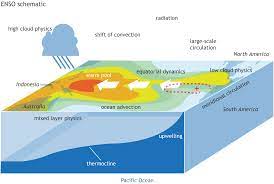 There is a growing body of research suggesting that climate change can cause extreme and more frequent El Niño and La Niña events.

Findings of the latest study: