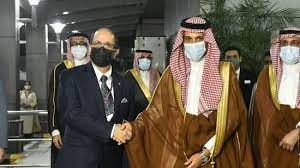 The Indian External Affairs Minister met the Foreign Minister of the Kingdom of Saudi Arabia.