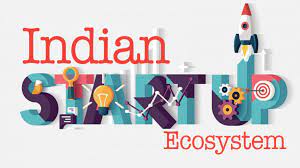 Various reforms and initiatives by the Government have led to booming of the Indian Startup ecosystem.