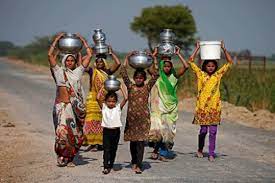 India is water-stressed due to changing weather patterns and repeated droughts. And the worst sufferers of this crisis are mostly women.