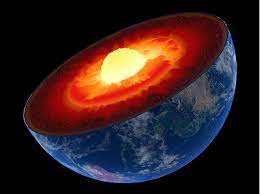 A recent study says that the inner core of Earth seems to have stopped spinning in the same direction as the rest of the planet.