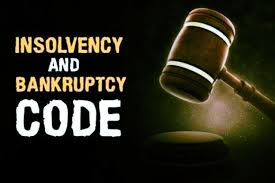 The government introduced the Insolvency and Bankruptcy Code (Amendment Bill), 2021 in the Lok Sabha.