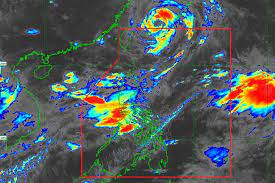 Typhoon In-fa, known in the Philippines as Typhoon Fabian, is an active and very large tropical cyclone inland over China.