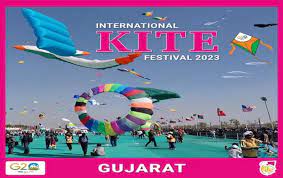 The International Kite Festival 2023 was Organised in Ahmedabad, Gujarat on January 8.