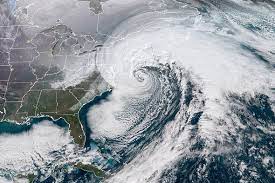 The US East Coast is bracing itself for a “bomb cyclone” (Nor’easter) that is on course to to barrel in from the mid-Atlantic.