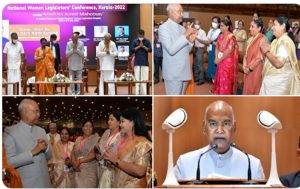 The two-day National Conference of Women Legislators has been inaugurated on 26th May 2022 by President Ram Nath Kovind in Thiruvananthapuram, Kerala. Arif Mohammed Khan, the governor of Kerala presided over the inaugural session at the Kerala Legislative Assembly Complex.