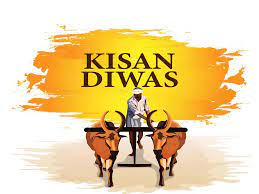 As many as 13 farmers known for innovative farming were felicitated to mark Kisan Diwas or National Farmers Day on 23rd December, 2022.