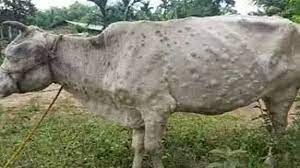 With the lumpy skin disease spreading fast among bovines in western and northern Rajasthan, cattle-rearers in the State are suffering heavy losses.