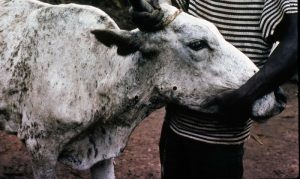 Lumpy Skin Disease is a viral illness that causes prolonged morbidity in cattle and buffaloes.