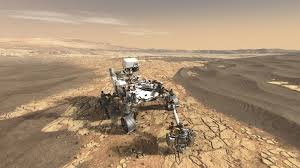 Two more rovers — NASA’s Perseverance and China’s Tianwen-1 — are set to land on Mars on February 18 and in May 2021 respectively.