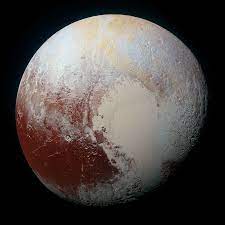 New findings about Pluto have been reported by the National Aeronautics and Space Administration’s (NASA) New Horizons probe.