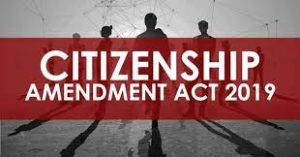 The Ministry of Home Affairs (MHA) missed the deadline of notifying rules under the Citizenship (Amendment) Act, 2019 (CAA).