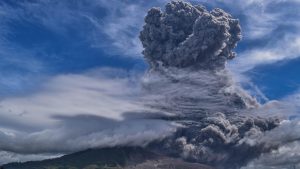 Indonesia’s Mount Sinabung, located in the North Sumatra province, erupted in May 2021 belching a massive column of volcanic ash and smoke 3,000 meters (3 km) into the sky.