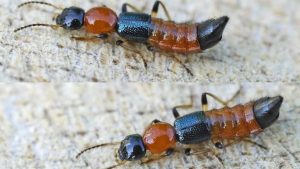 Around 100 students of an engineering college in East Sikkim have reported skin infections after coming in contact with Nairobi flies.