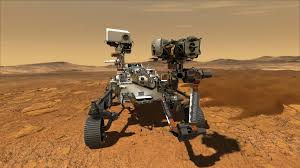 After a seven months’ journey from Earth, the NASA Perseverance is in its final stretch towards destination Mars.

About the Perseverance rover: