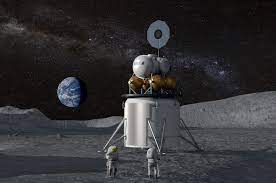 The first moonbound rocket and spacecraft of NASA’s Artemis program are expected to do a “wet dress rehearsal” on the launch pad in February.