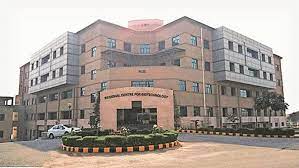 The government has for the first time set up a digitised repository where Indian researchers will store biological data from publicly funded research, reducing their dependency on American and European data banks.