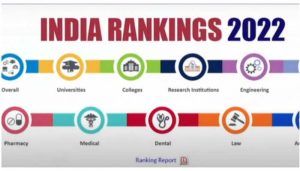 The Indian Institute of Technology, Madras (IIT-M), is yet again the top higher educational institute in the country followed by the Indian Institute of Science (IISc), Bengaluru, and IIT Bombay, according to the Ministry of Education’s National Institutional Ranking Framework (NIRF) 2022.