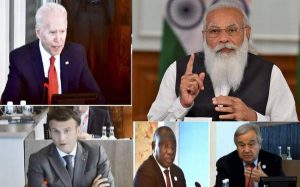 India signed off on a joint statement by G-7 and guest countries on “open societies”.