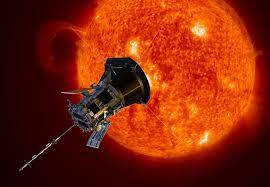 The Parker Solar Probe, launched by NASA, has become the first spacecraft to fly through the outer atmosphere of the Sun- ‘Corona’.