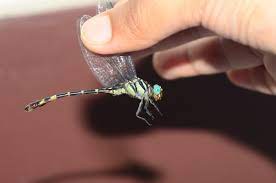 A new species of dragonfly ‘Platygomphus benritarum’ discovered in Assam has been named after two women for their pioneering work in the northeast.