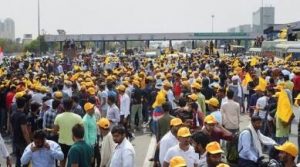 Members of the Ahir community have been sitting on an indefinite protest near Kherki Daula toll plaza in Gurgaon since February 4, demanding the formation of an Ahir regiment in the Indian Army.