An Iranian freighter Was Hit By Israel In The Red Sea: 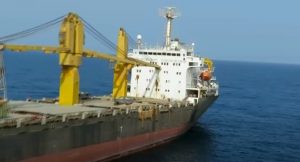 An Iranian freighter was hit by Israel in the Red Sea in retaliation for past Iranian strikes on its vessels. The blast struck the Iranian commercial vessel MV Saviz off the coast of Djibouti.