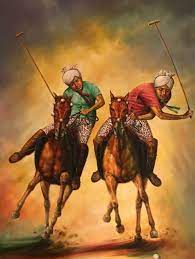 Home Minister inaugurated a 122-foot-tall statue of a polo player astride a Manipur Pony in Imphal.