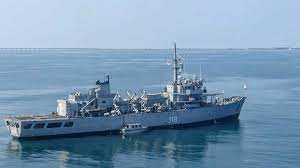 ‘Sandhayak’, the first of the four Survey Vessels (Large) project being built for the Indian Navy, was launched in Kolkata on December 05, 2021.