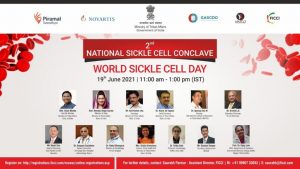 The Minister of Tribal Affairs inaugurated the Second National Sickle Cell Conclave on ‘Sickle Cell Disease’. The Conclave is being held to mark the World Sickle Cell Day observed on 19th June 2021 every year.

The disease in India is prevalent predominantly in Jharkhand, Maharashtra, Madhya Pradesh, Chhattisgarh, western Odisha, eastern Gujarat and in pockets of the Nilgiri Hills in north Tamil Nadu and Kerala.