Section 66A Of The Information Technology Act: 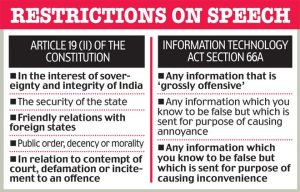 The Delhi High Court has asked the Centre to consider as representation a petition seeking to remove provisions from the statute such as Section 66A of the Information and Technology Act, which have already been declared unconstitutional.