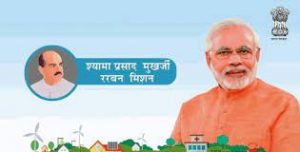 Aibawk cluster in the Aizwal, Mizoram becomes the first cluster to be completed under the Shyama Prasad Mukherji Rurban Mission.