What Is Permian extinction? 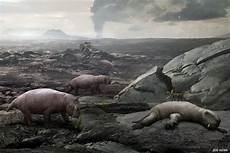 Scientists from Stanford University, warn of imminent mass annihilation of marine species similar to the Permian extinction (250 million years ago) that wiped out most lives in oceans