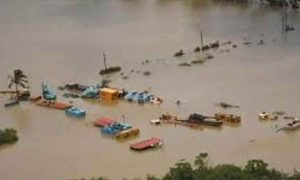 The southwest monsoon rainfall, 7% more than normal, has started to withdraw