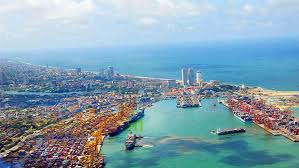 Sri Lanka said it will develop the West Container Terminal (WCT) at the Colombo Port, along with India and Japan.