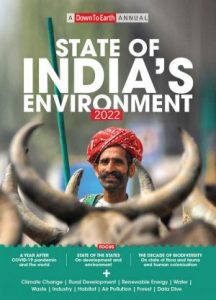 The Centre for Science and Environment (CSE), released the State of India’s Environment Report 2022.