Strikes In The Gaza Strip: 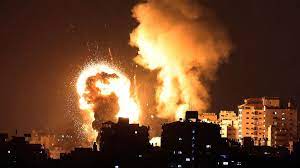 Israel has carried out strikes in the Gaza Strip after a rocket was fired from the Palestinian enclave into Israel.