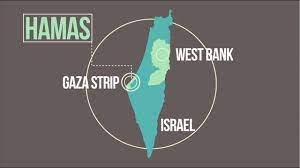 Israel’s military has launched strikes against militant targets in the Gaza Strip, a day after rockets were fired from the Hamas-ruled territory.