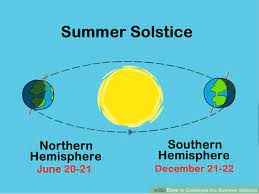 21st June is the day of the Summer Solstice in the northern hemisphere.