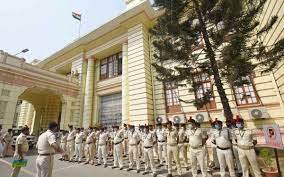 The Bihar Special Armed Police Bill, 2021 was passed recently amid protests by the Opposition.