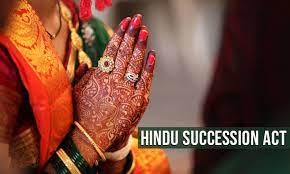 The Supreme Court asked the Centre to respond to a petition challenging provisions in the Hindu Succession Act as gender discriminatory.