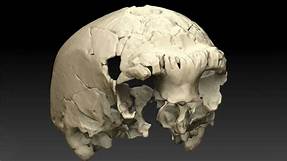 A jawbone fragment discovered in northern Spain last month could be the oldest known fossil of a human ancestor found to date in Europe,