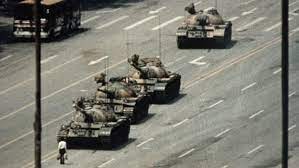 Workers at the University of Hong Kong put took down the towering “Pillar of Shame”.