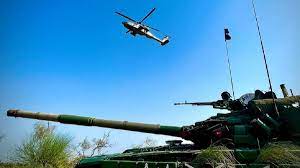 The Tiger Triumph exercise was jointly conducted by the United States and Indian militaries in Visakhapatnam, Andhra Pradesh.