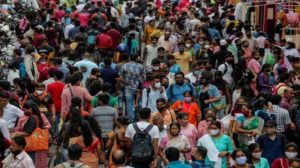 United Nations recently said that India’s population growth appeared to be stabilising, which shows that the country’s national policies and health systems, including access to family planning services, are working.