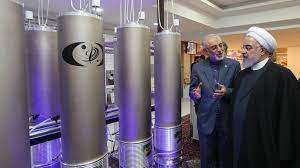 Iran’s atomic agency said that its stockpile of 20% enriched uranium has reached over 210 kilograms.