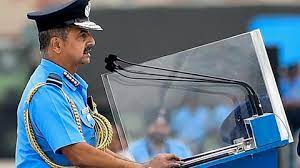 The government has approved the creation of a Weapon System branch for officers in the Indian Air Force (IAF) which will bring all weapon systems operators of the force under one roof.